Ludogorets won one point at the Bulgarian Army Stadium, in the match of the Half season against CSKA. 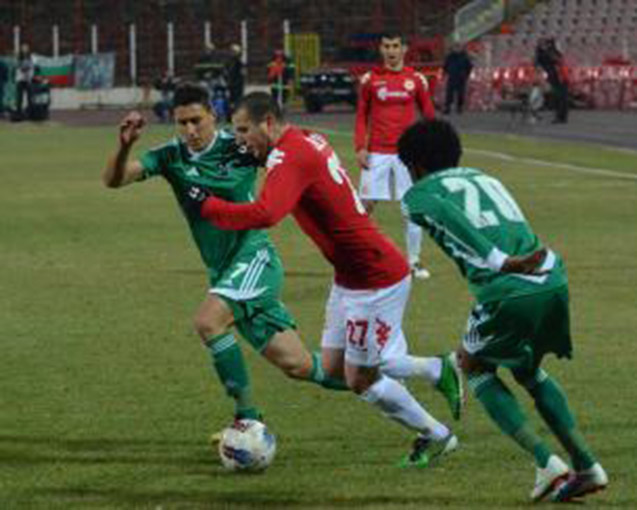 Ludogorets won one point at the Bulgarian Army Stadium, in the match of the Half season against CSKA. After this dramatic duel with “the army team”, “the eagles” will spend the winter at number one in the A-League. However, referee Georgi Yordanov harmed considerably Ivaylo Petev’s team, and his intervention impeded “the green” from triumphing.
The two teams, contenders for the top, made an exceptional show at Bulgarian Army Stadium.
CSKA took the lead at the very beginning when, in the 2nd minute a long range shot by Spas Delev ended up in possession of Moraes, who was covered by Choco, and, left alone against Golubovic, he scored 1:0.
CSKA’s players doubled the lead in the 20th minute, when Galchev drop-kicked the ball in Ludogorets’s penalty area, where Moraes was left uncovered and, with a very nice head shot, he sent the ball once more in Golubovic’s goal.
CSKA could’ve scored a third goal in the 30th minute, when Moraes directed a fine pass towards Zicu, who confronted Golubovic alone, yet he didn’t manage to pass through.
Emil Gargorov scored in M’Bolhi’s goal in the 35th minute, however, the goal was not allowed due to a questionable offside judged by the assistant referee. TV replays showed clearly though that it was a downright goal scored.
37th minute, Kostadin Stoyanov committed a foul against Marcelinho in CSKA’s penalty area, but, oddly, referee Georgi Yordanov didn’t pay any attention to the situation.
At the end of the half-time Ivan Stoyanov took the place of Mihail Aleksandrov, who got a contusion.
The entire second half-time passed dictated by Ludogorets’s players.
77th minute, after an error by Kostadin Stoyanov, Kabasele assisted Marcelinho to strike alone against M’Bolhi, but the Brazilian player sent the ball to the side of the host’s goal.
Ludogorets succeeded in decreasing its passive game in the 86th minute, when Quixada struck a close range volley at M’Bolhi’s goal, after an error committed by the CSKA captain Todor Yanchev.
Just 4 minutes later, in the 90th minute, Yordan Minev struck in CSKA’s penalty area, where Ivan Stoyanov shot from volley at M’Bolhi, sending the ball under the cross bar for 2:2.
After this draw, Ludogorets stays on top of the current rank, having 36 points and a better goal difference than the second in the ranking – CSKA, equally having 36 points.
„The first goal conceded was due to a team mistake. After that, we tried to take the lead, but a second goal was conceded. Second half-time, we deservedly scored two goals. In view of what we’ve shown during the entire half season, we’ll spend the winter on top, well deserved”, shared Ludogorets’s head coach Ivaylo Petev.