Ludogorets qualified for the round of 16 for the Bulgarian Cup after eliminating the third division Rozova Dolina 2:0. The match was played in front... 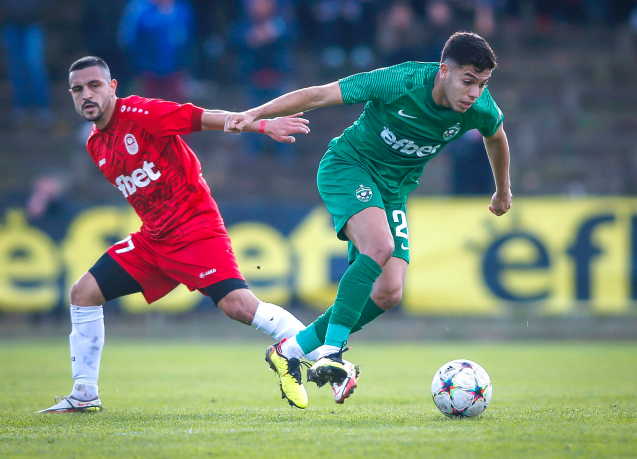 Ludogorets qualified for the round of 16 for the Bulgarian Cup after eliminating the third division Rozova Dolina 2:0. The match was played in front of about 4,000 spectators at the "Sevtopolis" stadium in Kazanlak.

Manuel Shaw and Ivan Yordanov left with injuries already in the first half.

Before the start of the match, the captain of Ludogorets Georgi Terziev handed over 20 soccer balls to the Rozova Dolina school. In the 6th minute, Ludogorets made the first shot. Dominik Yankov shoots, but the keeper of the home team hits a corner kick. Ludogorets created its best situation in the 18th minute. Bernard Tekpetey sent a powerful shot from the edge of the penalty area, but Ivanov managed to kick it into the corner. After his performance, Igor Thiago shot a header, but the ball went near the right post.

In the 40th minute, Ventsislav Ivanov fouled Ivan Yordanov. The young national of Bulgaria was injured and forced to be replaced, and Krasen Georgiev received a second yellow card for a reply and a corresponding red card.

In the 58th minute, the home goalkeeper Dimitar Ivanov made a great save. Cicinho received the ball on the right, returned it to Tekpetey, who shot powerfully, but Ivanov cleared for a corner. After an hour of play, Ludogorets scored a goal. Yakub Piotrowski made a good break, shot, the ball hit a Rozova Dolina football player, but ended up in Dimitar Iliev, who shot diagonally and scored in the net. This was the first goal for the player from the second team of the Eagles.

In the 73rd minute, Tekpetey hit the crossbar. Shortly before the end of the match, Jakub Piotrowski headed the ball, but Dimitar Ivanov scored again. Ludogorets scored the second goal in the extra time given by the referee. A home defender made a mistake, gifting the ball to Igor Thiago, who entered the penalty area, crossed and Rick Jhonatan scored without problems.