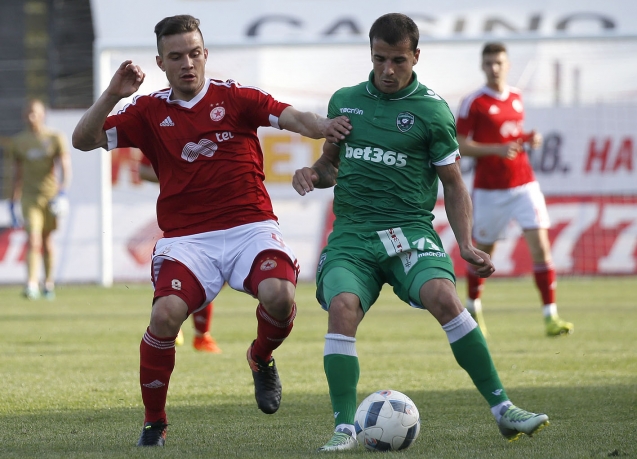 With two goals scored by talents from the children and youth academy of the club, Ludogorets II brought silence among everyone on the “Bulgarian Army” stadium, thus winning over the double of CSKA-Sofia II as a visiting team with a 0:2 score. In a game of the 29th round of the Second professional football league the team lead by Radi Zdravkov scored two times – Sasho Vasilev in the 35th minute and Oleg Dimitrov in 61st minute.

“The Eagles” played very tactical, they let the competitor create only a few goals situations while counterattacking in every moment possible.

The first goal was scored after a great long distance shot by Vasilev, which was like a missile launch from 25 meters. The first half ended with this score – 0:1.

During the second half Ludogorets increased its tempo and created a few very good goal situations. The second goal was scored in the 61st minute when Oleg Dimitrov caught an attempt by the CSKA-Sofia goalkeeper to return the ball, went ahead and hit the gate’s net. The hosts tried really hard to regain their presence, but Ludogorets’ defense was accurate and organized. In the few goal situations for CSKA-Sofia, which occurred mainly after the players were shuffled, the gatekeeper Dani Naumov was on the right level and interfered perfectly every time.

“We played smart and with high discipline, we were controlling the game and the win was well deserved. The fact that the goals were scored by former Academy members is very pleasing”, said the assistant-coach of “The Eagles” Todor Zhivondov.