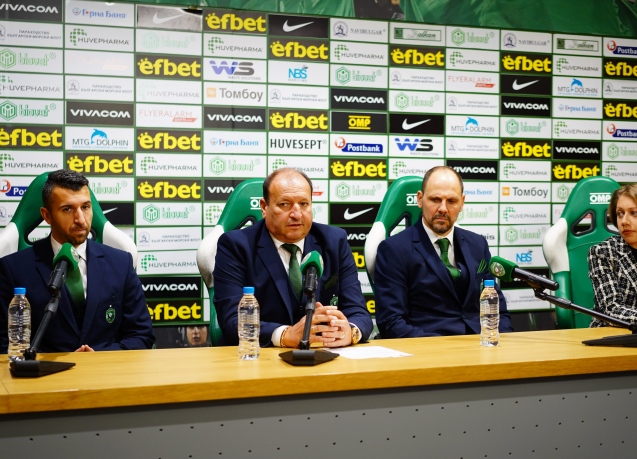 "All together we recorded exciting matches and wins. We sent a pretty good year of 2022. We continue on 3 fronts - the battle for the cup, for the first time in 3 years we play in Europe in the spring, and we are also in the 1/4-final for the Bulgarian Cup", said Georgi Karamandzhukov.

"Next to me is a well-known name - Svetoslav Dyakov. I welcome him. He will give his experience and strength and help coach Ante Simundza. It contains the DNA of Ludogorets. It will help the youngsters to show the face that the team needs to show. Goalkeeper Sergio Padt extended his contract for another two years - until 2026. We quickly agreed with him. Ludogorets also signed a contract with Dinich Almeida. We wanted him 1,5 years ago. Then personal financial conditions stopped us, because Antwerp offered him ones that we could not meet. His contract with Ludogorets is for 3,5 years. We saw that he wasn't playing regularly in Antwerp and we asked for him, with the transfer now a fact. We have been following him for many years, a football player with experience and qualities, he will help us strengthen. We assign for one year with paid rent Zan Karnicnik to the Slovenian Celie. He also has a buyout option. We are also negotiating for Cicinho who wants to return to Brazil for family reasons. He has 4-5 months left on his contract, he is 34 years old, the amount for his rights satisfies the management. We will find a way to send him off properly, to show our respect. These are the things surrounding our club to date," commented Karamandzhukov.

"There is a lot of interest in quite a few of our players. It's not just Cauly. But there is nothing specific. You will be notified upon transfer. It's all because of the good matches we played in Europe. Almost all the backbone of the last 10 years is gone. Replacements are hard to come by. The new players have shown qualities and are already used to the goals to be chased. This was seen in the two games with Betis, the two games with Roma, European teams, clubs with much more than our budgets. We didn't manage to continue in the Europa League, which was our goal, but we did a good performance in Europe," he continued. "I, as the sport director, thank the coaches that we do not have a single muscle injury in this cycle. And for the fact that Olimpico and Sevilla managed to readjust the players for the Bulgarian reality. However, most of the players debuted in Europe - Tissera, Rick, Piotrowski, Igor Thiago... The interest in our players pleases me the most. To Sergio Pad, to Despodov, to Cauley. Young Ivan Yordanov was injured for 17 months, came back, played against Dinamo Zagreb, reached the national team. Showed character. It is easiest to disguise something that is not there. There was no problem between Despodov and Cauley. When they are together on the field, they score goals and assists. There is no such conflict. The fact that Kiril does not play regularly has an explanation. He returned with an injury after the Nationals debacle in Georgia. He didn't do a single training session in Austria. There was no full preparation. He is one of our most important players and we wanted to use him as much as possible, but he could hardly play the whole game. There will be more incoming transfers. After the departure of Cicinho, we will be looking for a right-back. Ludogorets has the best players and coaches. That is why we have always succeeded and have been champions for 11 years. You know we're not selling because we need the money. Only with very good and profitable offers will our players be sold," he added.

"We've always wanted competition. CSKA, Levski and CSKA 1948 made good teams. Cherno more and Slavia have been playing together for a long time. We spent the winter in second place, and CSKA did not play in Europe. We had problems in the fall. Claude Gonsalves had an operation for a herniated disc, Cauley was injured, we were left with a limited number of players just against Dinamo Zagreb. We made mistakes in the championship as well. In the spring, I want us to achieve our goal - the title," said the boss.

"Anderlecht? The main goal is to become champions. Everything else is a bonus. A title team like Anderlecht is waiting for us, the Belgian championship is much stronger than ours. They changed the coach, they have good players. Tough matches ahead us. Ludogorets plays always and only to win, the goal is to bring an even classier team," he added.

“About Padt, 3 days ago his managers came. He had a year and a half left on his contract. He wants to stay. His family feels great, he is respected. We personally agreed with him for 30 minutes and he will stay until June 30, 2026. In the summer, AZ Alkmaar had a very serious offer for him. Then the coaches and I decided that Sergio should stay. With Simon Sluga, they are excellent and well-intentioned competition. As for the goalkeeper, we had some doubts before, but now things are calm. The owners have never compromised, they changed the pitch in 3 days... They give the best for base, camps and everything. Because of this, Ludogorets is an example for all clubs. We don't have a case filed against us - from another club, managers, we are fair to everyone. We ask from all other clubs that are part of Bulgarian football, a correct, friendly attitude. The matches are on the pitch. Lose, win, etc. remain in history. The Academy is sending off its most successful year to date. We are champions in the two elite divisions, and now they are first without a loss. We will not save effort and resources to develop our juniors," concluded Karamandzhukov.

"Many things that Mr. Karamandzhukov said, you already know. It is good to remember what we have achieved. I want all these achievements to motivate us for even greater ones in the next year. Our most important goal is to be champions. Everything else is a bonus. We will work hard because we have qualities and room for progress. We have another goal – to be an even stronger coaching staff, that's why we are hiring Svetoslav Dyakov, who is a living legend of our club and we expect a lot from him. We have to work hard to refresh the team. New players to adapt as quickly as possible. We need to be more aggressive as a team in the high press. The main thing - winter preparation is preparation for the whole year. We all need to be very ambitious, have passion, desire and think like a winner. We will work very, very hard. The fact that I became number 1 in Slovenia is not only for me, but also for Ludogorets, for everyone in the club. We all work together to achieve success. During the preparation we will try new things. Depending on the opponents, we can change the scheme. I know that this is Dyakov's first job as a coach. We talked to him, he is very ambitious and we expect a lot from him. Ivan Tsvetkov? He is in our scouting department. The idea is for him to be part of our camp in Turkey, to help us offensively, because he was a great footballer. It will then return to its position. I have always worked with the idea of starting strong. To be in our best shape always and to give our best. Our biggest goal is the title. It is very good for Bulgarian football to have more players on the bench from the spring. Because it gives us more options. Thus, all footballers who show good things during training will be able to play," concluded Simundza.

Svetoslav Dyakov was also officially presented to the media. "Thanks to the management, to Ante Simundza, for letting me enter their headquarters. I feel as good here as at home. I have come to work, to help the coaches, the players. Let's see Ludogorets, which we all want to see. The good thing is that this style is making a comeback because it had escaped. I was already on the base - it smells like champions. Everywhere - changing rooms, doctor's office, the boss's place. I am full of energy. I want to thank the people in Razgrad, but also the employees of Ludogorets. That was the main reason I came back. I want to turn this love into positive energy. I wish Ludogorets to be again on these fields where I played. Only time will tell how I do. Experience here will help me. But I will also learn. It is an honor to be part of Mr. Simundza's staff. I have ambition and self-confidence, I will help the team and myself to grow. I am always an optimist and look at things realistically. Everything is in our hands. It's good that we are in Europe. I hope other clubs have such successes. When Ludogorets does not get out of the groups, the year is considered unsuccessful. However, it will be successful for any other Bulgarian club", said Dyakov.