Ludogorets took over "Lauta" in a very interesting match, which ended 3:2 for the champions. Lokomotiv Plovdiv took an early lead through Martin... 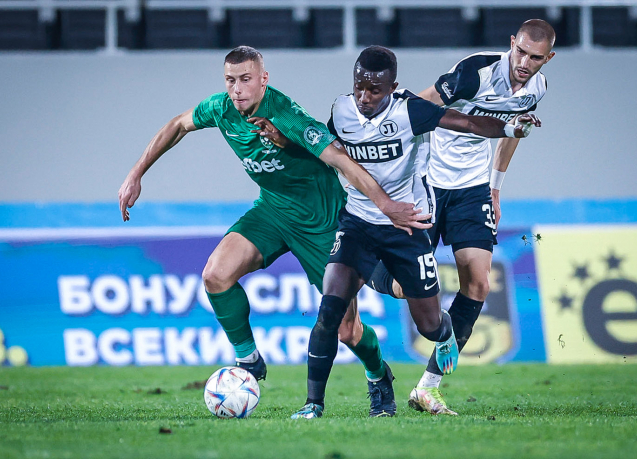 Ludogorets took over "Lauta" in a very interesting match, which ended 3:2 for the champions. Lokomotiv Plovdiv took an early lead through Martin Paskalev, but Matias Tissera made the turnaround with next two goals. Cauly scored for 3:1 and then Giovanny reduced the difference. The Smurfs tried to pull off a shock draw but the Eagles held on for three points to cut leaders CSKA's lead to just three points with two games in hand.

Lokomotiv Plovdiv started the match well and took the lead in the 4th minute. After an attack from the left Dimitar Iliev gave for Evandro. He shot immediately, Sergio Padt kicked, but right at the feet of Martin Paskalev, who couldn't make a mistake - 1:0. Ludogorets responded through Cicinho, who had a good chance, but shot straight at Dinko Horkas. In the next minutes, the Smurfs continued to be dangerous, but the defense of the Razgrad team managed it.

Ludogorets equalized in the 19th minute. Out of nowhere, Cicinho gave a wonderful lead pass to Matias Tissera, and he effortlessly beat Dinko Horkas, who came out to meet him - 1:1. Another quick attack followed, where Tekpetey attempted a pass to Tissera, but the Argentine missed the ball. Then Pedro Naressi would too, but right to Horkas. The turnaround happened in the 28th minute. After a wonderful diagonal pass from Jakub Piotrowski, Aslack von Witry broke through from the right and passed to Matias Tissera, who scored his second goal of the match – 2:1.

In the 38th minute Ludogorets scored a third goal. It was the work of Cauly Oliveira, who burst behind the defense after a wonderful pass from Jakub Piotrowski and beat Dinko Horkas. The goal was considered for a possible offside, but it turned out that it was covered by Ryan Bidounga - 3:1. At the end of the first half Ludogorets could have put an end to the dispute, as Tissera and Tekpetey were left alone against Horkas, but the Croatian goalkeeper saved his team. Two good chances followed for the hosts, but both Dimitar Iliev and Evandro were not accurate.

The second half started with poor play for Ludogorets. It was made by Matias Tissera, who received a good pass from Bernard Tekpetey but missed the goal from a clear position. In the 59th minute Tissera made a giant miss. Bidounga did not intervene well, and three players from Razgrad remained alone against Horkas - Tissera, Cauly and Tekpetey. Instead of passing, the Argentine tried to complete his hattrick, but missed the goal.

Lokomotiv Plovdiv reduced the score in the 64th minute. Dimitar Iliev broke through from the right and gave it to Giovanni, who with an accurate shot left no chance for Sergio Padt. The situation was examined with the VAR for a possible violation of Pierre Zebli against Jakub Piotrowski, but there was none and even sooner the Pole fouled the midfielder of Lokomotiv Plovdiv. In the 88th minute, Kiril Despodov crossed from a corner for Igor Plastun, who, however, did not find the target. Immediately after that, Kiril Despodov made a pass. He was brought on alone against Nonato's Dinko Horkas, but shot straight into the body of the keeper. In the final minutes, the situation developed in front of Sergio Padt's goal, but there were no real scoring chances and Ludogorets took the full set of points.