Ludogorets defeated Botev Plovdiv 1:0 in a match of the 15th round of the efbet League. The only goal at "Huvepharma Arena" in Razgrad was scored by... 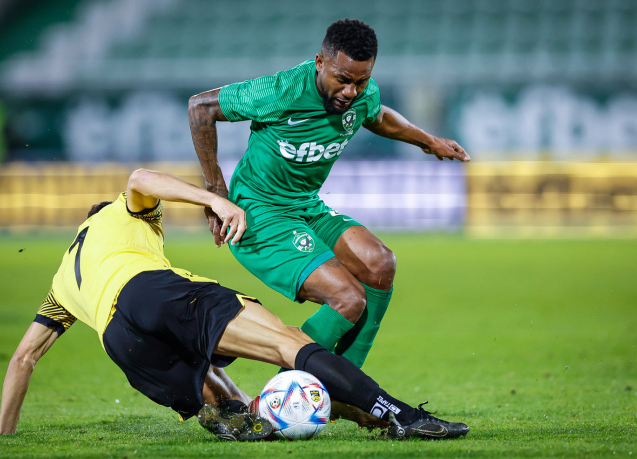 Ludogorets defeated Botev Plovdiv 1:0 in a match of the 15th round of the efbet League. The only goal at "Huvepharma Arena" in Razgrad was scored by Jakub Piotrowski in the 65th minute. With the success, Ludogorets collected 32 points and took second place in the provisional ranking. The team from Plovdiv remain in 10th place with 13 points.

Already in the 1st minute, Botev scored a goal through Brahimi, which was disallowed after VAR's intervention due to Manu's foul on Shaw. Ten minutes later, the Eagles missed an excellent scoring opportunity. Von Vitry crossed from the right and found Cauly left uncovered in the box. However, the Brazilian made a wildly inaccurate shot from 11-12 meters, with the ball going over the goal. In the 27th minute Tekpetey managed to free himself from Eto`o, advanced with the ball through the center and sent a shot that missed the target. In the 42nd minute Igor Thiago combined with Tekpetey in front of the penalty area and the Ghanaian found Von Vitri on the right of the penalty area. The Norwegian delivered a powerful shot that Hankic was able to knock into the corner. After his performance Plastun shot inaccurately with his head. In first-half time, Eto`o tried to surprise Padt with a free-kick, but his shot was off target.

The second part started with more assertive actions of the "eagles", but the dangers in front of Hankic continued to be absent. In the 54th minute, the goalkeeper knocked out a strong shot by Von Vitri which did not make it particularly difficult for him. In the 65th minute Ludogorets took the lead. Nedyalkov took the ball away from Mertens, then the ball ended up in Igor Thiago. The striker found Von Vitri on the right and the Norwegian reached the penalty area. There he passed to Piotrowski, who combined with Tekpetey, who found the Polish on the penalty kick, and for the midfielder from a few meters, Hankic was checked for 1:0. Shortly after, Tissera found himself in a shooting position and fired a shot that the visitors' keeper caught. In the 74th minute, Cauly missed to decide everything in the match. The Brazilian jumped from the second position and controlled the ball in front of Herman. The attacking midfielder attempted a shot from a small angle, but Hankic managed to clear it.

In the 80th minute the visitors' defense failed to clear Tekpetey's cross. The ball found its way to Naressi, whose shot from the edge of the penalty area was blocked.