Ludogorets draws 1:1 with HJK in Helsinki

HJK Helsinki and Ludogorets finished 1:1 in an extremely interesting match at the Bolt Arena stadium in the Finnish capital. Bulgarian team took the... 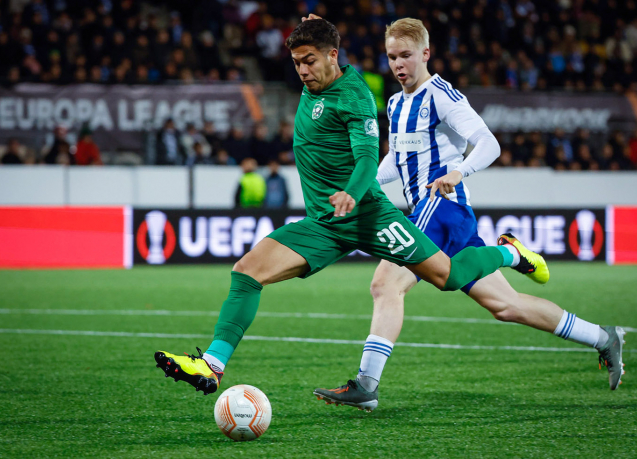 HJK Helsinki and Ludogorets finished 1:1 in an extremely interesting match at the Bolt Arena stadium in the Finnish capital. Bulgarian team took the lead in the 10th minute through Tissera, but the hosts equalized in the 55th minute. Thus, the distance between the two teams in the ratings remains 3 points before they meet again in a week in Razgrad.

The coach of the "eagles" Ante Simundza expectedly left Sisinho out of the starting line-up. Captain Anton Nedyalkov, who in the last matches acted as a central defender, was moved to his place as a left defender. Thus, Olivier Verdon's partner was Igor Plastun. It was also curious at the top of the attack. There instead of Igor Thiago, who was the starter in the meetings with Roma and Betis, the Argentinian Matias Tissera came on. We cannot fail to note the fact that Papua New Guinea international David Brown of the home team was included as a starter. Apparently, for the first time a football player from this distant country played against a Bulgarian team.

The match was played on an artificial surface, on which the Eagles usually had problems in recent years.

In the 3rd minute, the home team got into a good position. After an attack from the left, Lingman shot, but into the body of his teammate Malik Abubakari and the ball went out.

Ludogorets took the lead in the 10th minute. Bernard Tekpetey started a quick attack, found Cauly, who with a fine pass behind the seam led Matias Tissera, and the Argentinian elegantly dropped the ball between the legs of Connor Hazard - 1:0.

HJK could have equalized in the 27th minute. The home team broke down the right, Hetemay shot from a clear position with the ball going into Padt's net but rebounding to Malik Abubakari who saved. After that, Padt also kicked a shot into the corner. 10 minutes later Cauly found Bernard Tekpetey who shot powerfully from a good position but straight at Conor Hazard. In the 42nd minute, Kiril Despodov asked for a penalty, but the Ukrainian referee Yevhen Aranovskyi judged that there was none.

HJK was close to a goal in the first seconds of the second half. The Papuan Brown broke away from Vitri and was left alone against Padt shot very badly, straight into the hands of the Dutchman. A shot by Hetemaj followed, but it was out.

HJK equalized in the 55th minute. Then, Hetemaj headed Nedyalkov after a cross from a foul by Hostikka, and this time there was nothing to save Padt. Ludogorets did not score a second goal just a few seconds later - Despodov crossed from a foul to Piotrowski, who from a clear position would have scored, but Conor Hazard cleared. An attack by Cauly from the left followed, he passed to Despodov, who did not find the goal, and it seemed as if the ball had already gone out.

In the 70th minute, Ante Simundza made a double substitution, bringing Thiago on for Tissera and also taking off defensive midfielder Manuel Shaw and bringing on the more offensive-minded Gustavo Nonato. It was he who with a good feint broke free from the home defender and shot with his left foot, but Conor Hazard saved. Ludogorets continued to press, with Thiago leading Despodov from the right, but his shot was also deflected. Despodov then returned the gesture and passed to Thiago, who missed for Nonato, whose weak shot was blocked.

HJK Helsinki came close to a second goal as reserve Olusanya opened up a shooting lane but missed the target. A new big situation for the Finns followed. Another reserve – Radulovic, escaped from the defense and was alone against Padt, Verdon was coming behind him, but the Serbian could not overcome the Dutch guard. Ludogorets had an opportunity through Despodov to shoot from a free kick, but the captain of the national team did not find the goal. In the last minute, Vitri broke through on the right and passed to Thiago, who returned to Nonato. His left foot shot went very close but wide.