Ludogorets achieved an even 1:1 score against Braga on “Ludogorets Arena” stadium in Razgrad. The goal for “The Eagles” was scored by Marcelinho in... 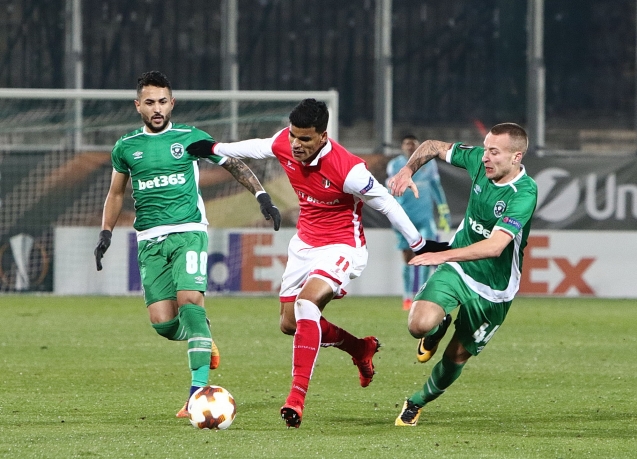 Ludogorets achieved an even 1:1 score against Braga on “Ludogorets Arena” stadium in Razgrad. The goal for “The Eagles” was scored by Marcelinho in the 68th minute, and Fransergio made the score even in the 83rd minute. As a result of this game, Ludogorets is still the group C leader with 8 points, followed by Braga with 7 and Hoffenheim with 4.

Ludogorets played great during the first half and the only thing missing was a goal in Braga’s gate. Dimitar Dimitrov surprised everyone with his team composition, and used the 4-3-3 pattern this time. Dimitrov chose a fast triple offense line, consisting of Misidjan, Lukoki and Wanderson, instead of a sole striker in head position. The team captain Svetoslav Dyakov was missing from the starting formation for the second time in the European tournaments.

“The Eagles” had the chance to open the score in the 4th minute when Misidjan went through the Portuguese strikers and found himself alone their gatekeeper Mateus, but hesitated for a second and his attempt was blocked.

Ludogorets continued to dominate and created a few attacks which were not followed by a direct kick. This is where the absence of a striker was notable. Braga’s players were limited to the front positions and during the first 45 minutes they did not manage to achieve a single kick towards Broun’s gate. Ludogorets, however, was able to do this a whole nine times. Lukoki was able to score in the 24th minute, but the goal was canceled due to an offside. This did not frustrate the team from Ragrad. Misidjsan outplayed a competitor and kicked the ball low, but Mateus saved again. Seconds later a commotion occurred in the penalty one of the visiting team, Moti got in control of the ball and shot from the borderline, instead of searching for a shorter was to pass, overthrowing everyone in the penalty zone.

The second half was completely different than the first. Braga was dominating and in just a couple of minutes two dangerous situations occurred in front of Broun. Sadas broke through ahead and was fouled by Moti on the border of the penalty zone. Danilo’s kick from the foul point sent the ball flying just millimeters from the gate beam. A little later Sadas again found a way to break through Ludogorets’ defense, but Broun saved his kick. The best moment for Ludogorets came in the 68th minute, when Wanderson was left uncovered and shot with his head after a corner shot and Mateus did manage to kick the ball back, but Marcelinho finished the situation with a goal just below the crossbar and made all the fans ecstatic. This was the Brazilian’s 9th goal with the team in a total of 50 matches in all of Europe. However, “The Eagles” were devastated in the 83rd minute when Fransergio was uncovered in the penalty zone and overthrew Broun with a head shot. This created an open situation in the group for Ludogorets, Braga and Hoffenheim, and the success of Ludogorets over Istanbul Basaksehir will push them ahead in the tournament.