Ludogorets lost 1-0 at home from Real Betis in a Group C match of the Europa League and thus second place will be decided in a head-to-head duel with... 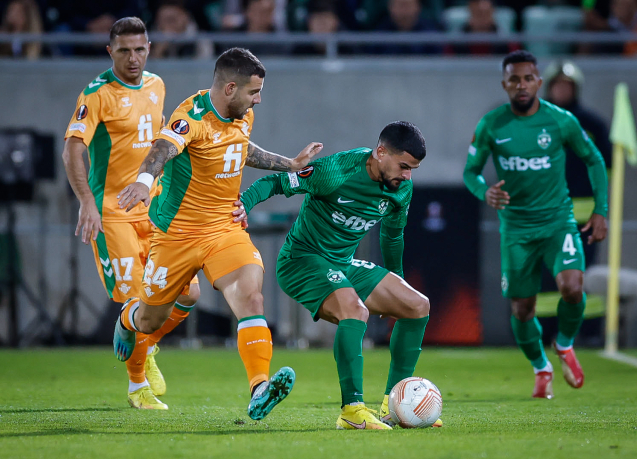 Ludogorets lost 1-0 at home from Real Betis in a Group C match of the Europa League and thus second place will be decided in a head-to-head duel with Roma on November 3 in the Italian capital.

The 2018 world champion with France, Nabil Fekir, scored the only goal. The Eagles played very hard, especially in the first half. The statistics are definitely in favor of the champions, with the visitors scoring with their only shot on goal.

Ante Simundza made a few changes to his squad. Brazilian midfielder Pedro Naressi, who was preferred to Manuel Shaw, was given a starting place for the first time in Europe. Igor Thiago led the attack on behalf of Matias Tissera, and Cicinho was chosen at left-back in place of Danny Grupper.

Spain legend Joaquin led the team with the captain's armband. On it was the face of Trifon Ivanov, who played for "Benito Villamarin" in the early 90`s. The Spanish international Sergio Canales was also a starter.

Ludogorets made its first good attack in the 3rd minute. Tekpetey broke down the right and cut back a little for Rick Jhonatan. The Brazilian from an absolutely clean position shot poorly, and just in case, Claudio Bravo kicked in a corner. After his performance, Anton Nedyalkov shot straight into the hands of the Chilean guard. Another good attack by Ludogorets followed. Before Cauly found space to fight, but he didn't do it hard enough and didn't make it difficult for Bravo. In the 11th minute, Tekpetey made a sharp pass for Cauly, who, although in a clear position, was unable to reach the ball. Another action followed by Cauly, who, however, instead of passing to an uncovered teammate, tried a strange shot that missed the target. In the 22nd minute, Claudio Bravo showed his class again. This time after a nice strike on the ground by Igor Thiago.

In the 26th minute, after a dispute over a high ball with Cicinho, Betis captain Joaquin collapsed to the ground. He got injured and was replaced by Luis Enrique. After half an hour of play, Ludogorets made another good attack. Cauly and Tekpetey were again involved in it, but the Ghanaian's shot was not accurate, although it went close. A very quick attack from the left followed, with Rick and Cauly exchanging quick passes, a pass to Igor Thiago followed, but a Betis defender cleared. In the 40th minute, Thiago escaped from the defense, the Brazilian wondered whether to pass or beat, eventually he tried a pass for Tektepey but Juan Miranda with a brilliant split cleared.

For the first part, it can be concluded that Ludogorets showed an excellent face and outplayed his famous opponent, making 9 shots, 4 of which were accurate, but Claudio Bravo was irresistible.

World champion Nabil Fekir came on for Betis at the break, replacing defensive midfielder Akuku with a winger that clearly showed Manuel Pellegrini's desire to change something in his team's game, and he did. In the 52nd minute, Ludogorets asked for a penalty for a foul against Rick Jhonatan, but it was not awarded, as according to the referee, the contact with a Spanish player was not enough to point to the penalty spot.

In the 56th minute, Betis took the lead. After the touch, the ball reached Luis Enrique. He made a no-look pass to Nabil Fekir, Aslak Fonn Witry covered the offside and Fekir outplayed Olivier Verdon to open the scoring with no problems. Until the end of the match, Ludogorets tried to return the goal, but there were no clean scoring chances. Thus, the second place in Group C of the Europa League will be decided on November, 3th at the Olimpico in Rome.

It should be noted that Claude Gonsalves, who was recovering from an operation, returned to play for the team of Razgrad.